All About Sinus Infections 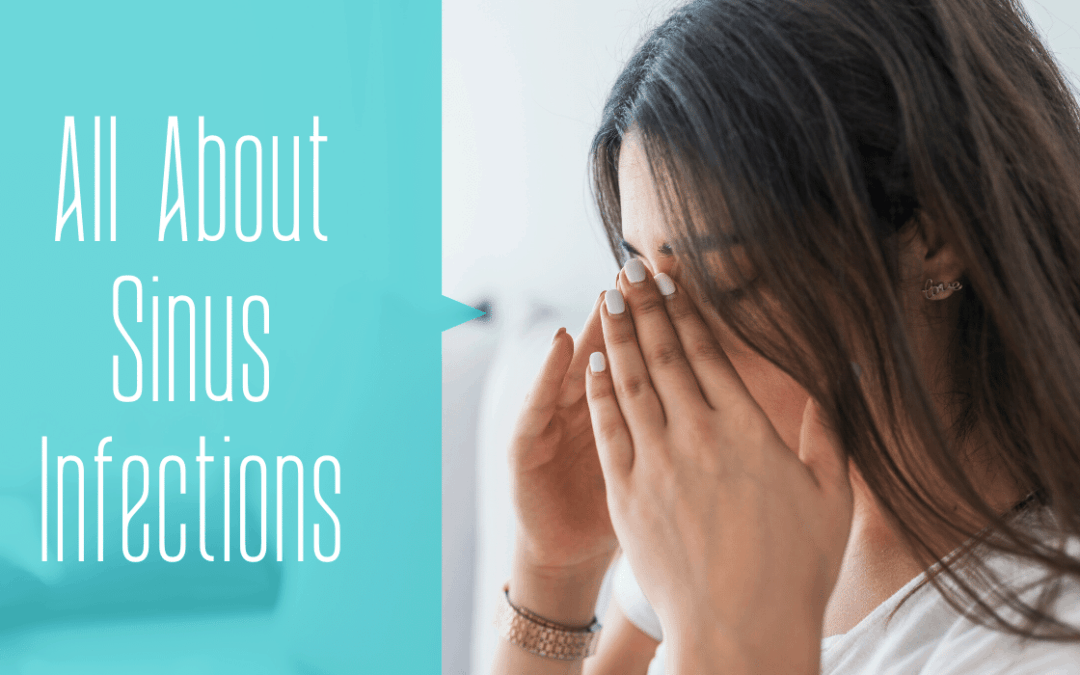 It’s the cold time of year and also the time when we are at the highest risk for a sinus infection. If you’ve ever had a sinus infection before you know how painful and uncomfortable, they can be. A sinus infection, also known as sinusitis, causes stuffy, painful pressure in the nasal cavity and should not be ignored if you want to heal quickly. Affecting more than 31 million people in the United States each year sinus infections are usually caused by viruses. While it can be difficult to tell the difference between a common cold, an allergy attack or sinusitis it’s important to know the difference so you can act accordingly. Below are a few common symptoms of a sinus infection that will help you know exactly what you are dealing with.

When fluid becomes trapped in your sinus passages filling the sinus cavities it can cause an awful amount of pressure and pain.  It may hurt to touch the areas around your eyes, nose cheeks or forehead where your sinuses are congested. It is common for bending over to exasperate symptoms of pain. Often people with sinus infections will feel as though they have a sneeze that is impossible to release. It is common to struggle to sleep when suffering from the pain of a sinus infection often cluing patients into the fact that they are suffering from more than a common cold.

Often the buildup of pressure in the nasal passages will cause headaches. If your head ache is truly a sinus headache it will be caused by an obstruction of nasal drainage, which allows mucus to build up inside your sinuses. This often manifests its self as pain in the front of your head but can also cause full body and neck pain.

It is normal for your body to produce mucus on a daily basis. In fact, on average a healthy person creates about a quart of mucus every day. Mucus helps clean your nasal passages and fights harmful germs and infections. When your body produces too much mucus this is commonly called a runny nose and when mucus runs excessively down the back of your throat this is referred to as post nasal drip.

Often the problem is not that there is too much mucus but that there is a blockage making it difficult to clear, causing congestion. This occurs often when fluid is trapped in the sinuses providing a place for viruses’ bacteria and fungus can proliferate. It’s important to stay hydrated to encourage the breaking up of mucus so your throat can clear and heal.

Post nasal drip caused by sinus infections can make you feel like your throat is constantly in need of clearing and can cause a cough that is hard to shake. It can make your throat soar and hoarse. In many cases people try to cough to clear mucus out of the throat.

A fever is not a typical symptom of either chronic or acute sinusitis, but it is possible. A fever can often mean that the body is fighting off any infection including sinusitis

When you start to notice that your tissues are showing green or bright yellow mucus this is a clear sign of a sinus infection. It is normal for bacteria, virus and fungus to cause your mucus to change color.

Fighting off a sinus infection can be exhausting work. It doesn’t make it any easier that you are coughing and sneezing and struggling to breath. If you have a sinus infection then it is important to rest so your body can recover.

If your cold is accompanied by halitosis also known as bad breath than there is a high chance your cold is actually a sinus infection. Sinusitis increased mucus production can cause an excess of bacteria already in the mouth to create an unbearable smell.

If you are suffering from any of these symptoms make sure to drink plenty of water, eat nourishing food and get plenty of rest. It’s important to know the symptoms so you don’t transmit sinusitis to others. Most sinus infections clear up by themselves. Make sure to take care of yourself and others this cold and flu season.